Skip to content
Date: January 15, 2013Author: CoolBrands - Around the World in 80 Brands 0 Comments

KLM – We Care, Because We Travel –

We are in the Passenger Terminal Amsterdam in the city’s harbour area, where KLM has invited us to join the dialogue on the journey to sustainable aviation.

During the Golden Age in the 17th century, Amsterdam’s port was at the centre of a global trade network, with ships sailing to Asia, Africa and the Americas, and merchants trading goods across Europe.

Much has changed since then: in those days merchants travelling to Brazil were away for months, maybe even years. Today, businessmen fly to São Paulo and are back in the polder within days.

Of course today travel has become much faster, but also less sustainable: instead of sailing, we now make the crossing to the New World in planes, which emit CO2 and contribute to global warming. And this is exactly why we are here: to discuss how the future of aviation can be more sustainable.

In the lobby of the Passenger Terminal we talk to Camiel Eurlings, KLM’s managing director. “In the past, profit was the driving factor behind any company, but today we attach just as much importance to assessing the impact of our operations on our planet and its people.”

“As a matter of fact, just this morning we renewed our partnership with the World Wildlife Fund for another four years. We are very proud of this, since these kinds of partnerships are uncommon in our industry.”

Without interrupting the conversation, Camiel leads us to the terminal’s promenade deck, which offers spectacular views over the harbour. 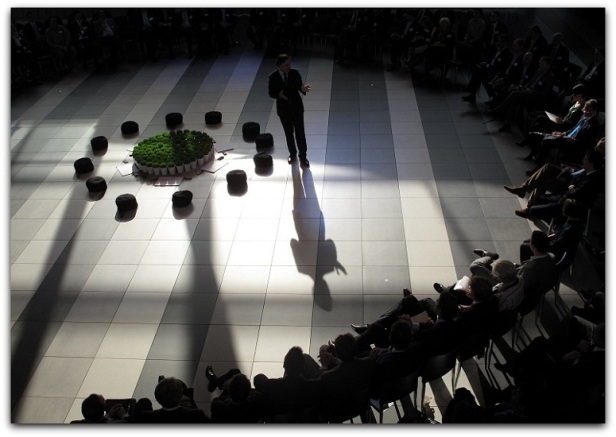 “Why is the World Wildlife Fund teaming up with an airline?” I ask. Camiel looks out over the water where a cruise ship is approaching. He turns back to us and says: “We decided to work with WWF on two key points.

“The first is push back climate change by innovation, where we talk about sustainable bio-fuels among other things. The ultimate aim of the air transport industry is emission-free flight, but we’re not there yet. We recently did some demonstration flights, but a lot more effort and innovation are needed before we achieve our objective.

The cruise ship is slowly approaching the docking platform. “Did you know that sea transport has a higher CO2 emission than aviation?” Camiel says as he contemplates the colossal ship edging its way to the quayside.

“And number two?” I ask. “You said there were two key points.”

Camiel looks at me for a few seconds before picking up the thread of his story. “Of course. The second is minimise our impact on the environment: we want to reduce CO2 emissions far beyond the regulatory requirements. Did you know that aviation emissions are currently not included in the Kyoto Protocol? We are not prepared to sit around and wait until new regulations are introduced in order to start acting. We want to get ahead of the game and find ways of reducing our CO2 emissions, starting now.”

He lets his words sink in for a few seconds before continuing: “The fact is, we fly people around the world and emit CO2 in the process. The flying part is the benefit. We enable people to do business in other countries, to meet other people, to learn about other cultures. We connect people – that’s the benefit of the benefit, the reason KLM exists.”

“The downside is the impact of aviation on the planet – that’s the reason we’re working with the WWF.”