Skip to content
Date: March 29, 2014Author: CoolBrands - Around the World in 80 Brands 0 Comments

It is 6am as we head out of Cairo along the west bank of the Nile. “We’re not going to Giza,” our guide Eman says decisively. “That’s for tourists.”

Instead we are going south to the Red Pyramid in Dahshur, the first sheer-sided pyramid, which was built around 2600 BC. “We will even be able to go inside to see the tomb!” Eman says excitedly.

As we stand at the foot of the 101-metre-tall pyramid, Eman explains that we have to clamber up the sloping stone face to reach the entrance, which lies at a height of 27 metres. The site is deserted and as we squeeze through the low narrow entrance we feel a sense of trepidation, as though we are about to discover a secret treasure. 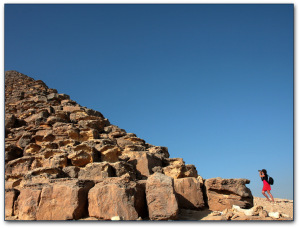 Half bent over, we make our way down the long steep corridor. After about 40 metres we emerge in the first burial…